Update on H-1B Registration Lottery in the COVID-19 World 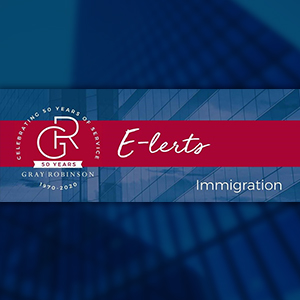 On Friday, March 27, 2020, United States Citizenship and Immigration Services announced that it had selected sufficient electronic H-1B registrations to reach this fiscal year’s numerical allocation of H-1B visas; the “H-1B cap” has been reached.

But the H-1B lottery might not be completely over.  If your H-1B registration has not thus far been selected, there still remains a glimmer of hope that USCIS will return to the pool of H-1B registrations at a later date and select additional registrations, because (i) USCIS will not approve all H-1B visa petitions submitted, a portion will be denied, and (ii) due to the economic climate created by COVID-19, some of the selected H-1B registrations might not materialize into H-1B petitions, because some employers might no longer be able to support an H-1B worker, due to lack of funds or insufficient work to keep an H-1B worker busy as planned.  They might be furloughing or laying off workers instead.

As a result, an H-1B registration status might continue to show on the employer’s my.USCIS.gov account as  “Submitted” after March 31, because “Submitted” registrations could remain in consideration for selection right up until the end of the fiscal year, by which time all registration statuses will be one of: “Selected,” “Not Selected,” or “Denied.”  Even so, most would-be H-1B workers will not have the luxury of being able to wait out the summer for the answer and so they must come up with alternative strategies where possible.

COVID-19 is  a  moving target.  The Immigration world is constantly changing as a result.  Legal issues are arising daily.  Rest assured that we at GrayRobinson are closely monitoring the impact of the pandemic and are responding to all  immigration and other issues affecting our clients as they arise.  We are here to help; let us know if you need us.